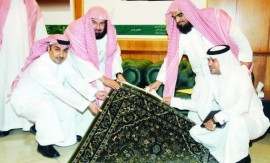 The Haram Mosque in Makkah will have green mats while the Prophet’s Mosque will have red mats, he said.

The company will supply the mats within 18 months. The deal comes at a time when the two mosques are witnessing massive expansion projects ordered by Custodian of the Two Holy Mosques King Abdullah.

The two expansion projects are expected to cost more than SR 150 billion and double the capacity of the two mosques.